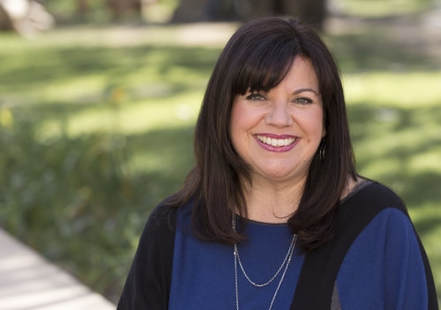 Anna Betancourt is our music director at St. Polycarp.  This is a little information about her background. Anna has been a lifelong member of St. Linus parish in Norwalk, California where she served as Music Director for many years. Anna has over 30 years of experience directing various choirs ranging from Spanish and Traditional choirs to Handbell, Children’s and Contemporary Ensembles.

Anna worked for the Archdiocese of Los Angeles, where she served as a Music Committee Member and served as a member of the Religious Education Congress Liturgy Committee. Anna is a speaker and presenter at various conferences and workshops on Music and Liturgy throughout the country. Anna is also the Spanish Choir Director at the Cathedral of our Lady of the Angels in Downtown Los Angeles.

Anna is a recording artist for Oregon Catholic Press, WLP and GIA. Her voice can be heard on more than 40 recordings with various Catholic artists and composers including Pedro Rubalcava, Bob Hurd, Jaime Cortez, Tony Alonso, Peter Kolar, Rafael Moreno and John Angotti among others.

Anna and Michael have been married for 22 years and together they have 2 children, Matthew, 19 and Samuel, 16.